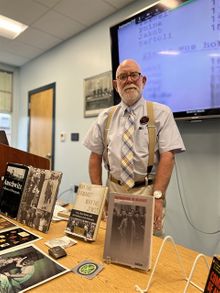 The South Jersey Holocaust Coalition returned to its regular events on June 7th with a compelling presentation by teacher, author, and Coalition member, Robert Holden.

Based on the most outstanding real-time film footage during the Holocaust and specifically "daily life" in the Warsaw Ghetto, Bob used the film to expose the propaganda tools and approach that the Nazis used to show their world the ghetto life with contrasting and scripted scenes of luxurious life in that same ghetto.

The film, Engineering Evil, narrated by Dr. Michael Berenbaum, who presented for the SJHC last November, gives viewers specific and personal insights into the lives of those who perished and into the actions and plans of those who enacted the Holocaust. Viewers will travel through the archives of eastern Europe to the United States Holocaust Memorial Museum in Washington, DC and its restoration labs in Israel to see how artifacts serve as powerful links to those who lost their lives.

A second and stunning archival film is A Film Unfinished, another German propaganda film found in the archives titled "Ghetto" referring to Warsaw.

"the intention of the propaganda is not known."

It can be viewed here:     Engineering Evil

A Film Unfinished, is available through Amazon Prime.

Photographing the Holocaust, by Jenina Struk

The Holocaust by Bullets, by Father Patrick DesBois

Why the Germans, Why the Jews, by Götz Aly

this is a secure site*